These are not really recipes, but just some different ideas of how to fix things and foods you may not have tried before.
First is a different version of pancakes. I discovered a whole wheat blend pancake mix (Aunt Jemima) that I really like. 100% whole wheat pancakes just don't taste very good, but I wanted to try and have them be as healthy as possible, so when I came across this mix I was very happy. It's delicious too. The different idea I wanted to share with you though came from the Deceptively Delicious cookbook. The idea is to add 1/2 cup of sweet potato puree to the mix. (You can buy a canned version a lot like canned pumpkin. It's pure mashed sweet potato with nothing added- at HEB in the canned vegetable aisle) I also like to add a little cinnamon and some vanilla. The pancakes are delicious and a lot healthier!
Tip: When you add the purees I find it works best to use a little less water in the mix or the batter becomes too thin. 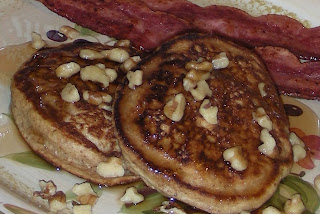 Just the other day I saw on Jon and Kate plus 8 that she had made banana pancakes. I don't know why I had never thought of that or heard of it before, but I thought it sounded good, so I tried it just by mashing up a banana and adding to the mix. (I also wanted to add nuts, but didn't think the kids would like it, so I put some on top of mine.) They were awesome! They tasted just like banana bread! 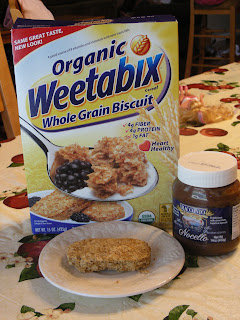 Another one of my favorite finds is Weetabix. They are reportedly the most popular cereal in the U.K., but the English aren't known for their great food, right? I decided to try them after seeing commercials for them and being quite intrigued. When you first see them you may be taken aback. They are odd shaped cereal "biscuits". But I LOVE them. My favorite way to eat them is to toast them and then put peanut butter and chocolate hazelnut spread (like Nutella, only I found one with no partially hydrogenated oils and less fat and calories called Racconto Nocello at HEB) on them. Yummmm!!! Sometimes I do just chocolate and add some strawberries or a banana. 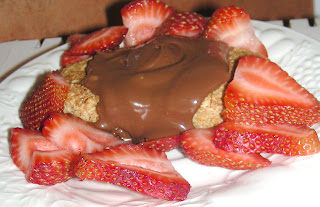 Another great thing to do with them is to break one up an put yogurt and cut up strawberries on it!! It's like a yogurt parfait. It's a delicious and filling, yet nutritious snack! 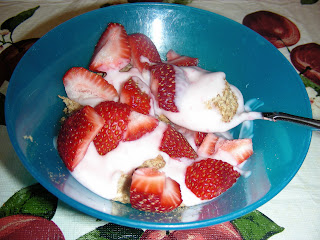 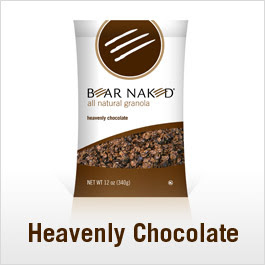 Another of my new faves is a granola Erica introduced me to called Bear Naked. I usually eat this as more of a snack though. The Heavenly Chocolate is to die for!! It's awesome just to munch on by itself. It's also great in a bowl with milk or with a banana!! Yummmmm!
It's the only flavor I've tried just because I love it so much and it's kind of expensive (almost $5 a bag), but I saw on their website some new flavors that look really good!!
Posted by Mindy at 11:17 AM

Love the ideas, love the pictures! I will definitely try some of those things out! I just might try the banana pancakes out tomorrow morning.

I love bare naked. Kashi now has there own similar granola.

Six hungry mommas share ideas and recipes in our attempt to feed our children and ourselves.